The US mother-of-two, 27, raised eyebrows recently after she admitted to sleeping in a separate bedroom to her husband, Tate.

Taylor explained she and her husband have very different sleeping habits and opinions on how to decorate a bedroom, so they decided to have their own spaces.

READ MORE: ‘My family is putting too much pressure on me to become a mum’

It all started after Tate pretended to fall asleep in the guest room under the guise of looking for a shirt.

“How it started is actually really funny, he would be in our room looking around for a shirt, and then he would go look for the shirt and just never come back,” she said.

“Then one night he was doing it again and I was like, ‘Babe, don’t even try looking for the shirt. Just go sleep in the guest room, okay?'”

No, we sleep in the same room

No, but I have thought about it

Yes we have separate rooms.

I do not live with a partner.

Taylor admitted she was sleeping really well without her husband next to her every night and was fine with the arrangement.

She also said Tate had some “creepy” sleeping habits which made it hard for them to sleep side-by-side.

READ MORE: Kim Kardashian’s first husband Damon Thomas calls her ‘unfair’ for saying she married him while on drugs

“He also sleepwalks, sleep talks, and does some creepy s–t, so this just happened to work out,” she said.

“He likes it really cold and I like it pretty warm. He likes silence, and he likes the white noise machine.”

Despite the naysayers, Taylor said their marriage is still “really healthy”.

“I feel like this is the best situation for us,” she added. “We have a really healthy marriage, we get good sleep, and we both love our separate rooms.”

In another video, Taylor gave followers a tour of their two bedrooms.

While Taylor’s room was sparkling clean with photos of family on the wall and fresh bedsheets, Tate’s room was messy and unorganized, and laundry was haphazardly tossed onto the floor.

Most of Taylor’s followers were supportive of the idea and claimed separate bedrooms wasn’t an indication of any problems in a marriage.

“My parents have happily done this for over 40 years,” one woman proudly declared.

“I think having separate rooms is key to a healthy lifestyle because quality sleep is SO important,” another added.

Others, meanwhile, claimed it was “odd” behavior for a husband and wife to have different sleeping quarters.

“I don’t understand why you two sleep in separate rooms? Very odd,” one person said.

One woman wrote: “I had separate rooms with my husband for 7 years. He’s now my ex-husband.”

For a daily dose of 9Honey, subscribe to our newsletter here 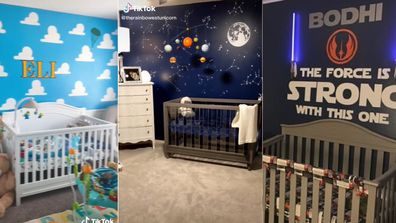