Skip to content
The latest battleground between Australia’s biggest supermarkets is the price of local lobster as grocers look to capitalize on the annual Easter seafood rush.

Both Coles and Woolworths have committed to selling Western Australian-sourced rock lobster at $22 each, which is almost half the traditional price per whole lobster.

Starting from tomorrow, Woolworths says it expects to sell more than 70,000 individual lobster along with 100 tons of salmon and more than 180 tons of prawns.

“We know value is important to our customers each time they shop with us, and rock lobster continues to be one of our most popular seafood products during major holidays like Christmas and Easter,” Tim Dudding, Woolworths Commercial Director for Seafood, said.

“Our team has been working closely with suppliers all across the country to ensure customers can enjoy quality lobster and seafood as part of their Easter spread, all at a competitive price.”

Coles has reported a similar forecast, expecting to sell more than 350 tonnes of seafood – including 130,000kg of salmon and more than 200,000kg of banana prawns.

“With Easter just over a week away, we are ready for a massive week of seafood sales with customers buying 200 per cent more fresh seafood compared to any other week of the year,” Andy Mossop, Coles General Manager for Bakery, Deli and Seafood , said.

“We’re delighted to be able to make great quality and responsibly sourced Australian seafood like WA rock lobster more affordable so our customers can treat themselves over the long weekend.

“We’ve kept the prices low on some popular seafood lines since Christmas, and now we are offering an even better price on raw banana prawns at just $23 per kilo.”

It’s not the first time the two major grocers have gone head to head on lobster.

Over Christmas both Woolworths and Coles sold thousands of tons of $22 rock lobster, as the supermarkets were able to capitalize on increased supply due to reduced overseas demand.

Aldi Australia’s shopping expert Kylie Warnke said they too will be offering specials on seafood.

“If you’re hosting friends or family for Easter this year, ALDI has you covered with our delicious range of quality seafood at the best possible value,” she said.

“With fresh and frozen options available there is something for every dish and every budget, from fresh fish fillets, salt and pepper squid or decadent prawn, scallop and lobster bisque pots.” 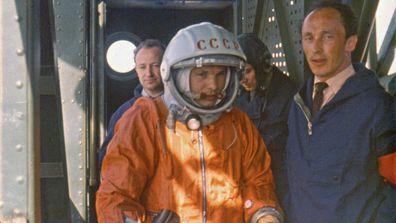 USSR shocks the world by announcing first man in space